Covid Is the 21st Century's Sputnik
The space race spawned Darpa. The pandemic proved we need an agency for health innovation.
By Michael Milken

Americas leadership of business, science and culture seemed unassailable in 1957. With less than 6% of the worlds population, the U.S. produced close to 40% of global economic output, according to a United Nations survey. Scientists working in the U.S. had been awarded by far the most Nobel Prizes. The U.S. had more telephones, television sets, cars and refrigerators than any other country. Students came from every nation to study at great American universities. Yet all it took to shake Americas pride and confidence was some electronic beeps from hundreds of miles above earth.

On Friday, Oct. 4, 1957, those beeps from the first artificial satelliteSputnik 1signaled that the Soviet Union had beaten the U.S. to space.

Sputnik frightened Americans. Paul Dicksons history of the event, Sputnik: The Shock of the Century, likened the psychological impact to Pearl Harbor. The R-7 rocket that propelled Sputnik to space was powerful enough to drop nuclear weapons on U.S. cities. I was concerned and wrote a letter to President Eisenhower offering to help. Though only 11, I was obsessed with math and science, especially the concept of space travel, and wanted to join the space effort.

We now know that Moscows moment of apparent triumph was the beginning of the end for the Soviet communist system. Their claims of scientific superiority woke the U.S. up. In 1958 Congress established NASA, the National Aeronautics and Space Administration, and Darpa, the Defense Advanced Research Projects Agency. Both organizations were designed to assure that America would never again fall behind in scientific and military leadership. Eisenhower also signed the National Defense Education Act that year, which injected $1 billion into science and technology education.

Although well known for successful moon landings, NASAs greatest legacy may be how it expanded understanding of the universe and the technologies needed for its exploration. Darpas inventions are woven into our daily lives: the internet, the Global Positioning System, graphical user interfaces, and practical applications of artificial intelligence like Siri and Alexa.

The ascendant science of the 20th century was physics, which was used to split the atom, create the transistor, revolutionize communication, and speed development of lifesaving medical devices. After Sputnik, it became cool to be a scientist, mathematician or engineer.

The current battle against Covidour new wake-up callshould mirror the response to Sputnik. Just as the U.S. could have created NASA and Darpa well before 1957 if our leaders had better understood the global challenge, the worst of Covid-19 could have been prevented if the country had prepared earlier. Better late than never, Darpa was launched in 1958 on a venture-capital model that funded risky innovative projects and had a high fail rate. Free from the constraints of the Defense Departments risk-averse processes, Darpa soon became a crucial component of U.S. national security. A medical equivalent of Darpa could become a crucial component of U.S. health security. 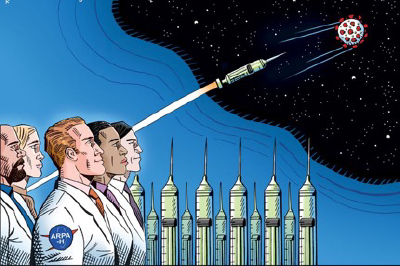 President Bidens 2022 federal budget proposal includes $6.5 billion for a new Darpa-like group under the National Institutes of Health. Called the Advanced Research Projects Agency for Health, its current proposed funding recently approved by a House panel is $3 billion. That is a tiny fraction of the roughly $4 trillion the U.S. spent on healthcare last year. This new health agency would pursue the greatest challenges of medical scienceAlzheimers, cancer, diabetes, pandemics, rare diseases and more. It could encompass projects like the development of mRNA vaccines to prevent most cancers, molecular ZIP Codes that target drugs to specific cell types, and new brain imaging.

The NIH must provide careful management of the governments medical-research budget, just as the Defense Department must coordinate Americas military programs. But this new group would be separate from the incremental, hypothesis-driven structure of the NIH. To its credit, under the leadership of Francis Collins, NIH responded to the Covid-19 pandemic with remarkable speed. The agency launched two industry-nonprofit partnership programs (ACTIV and RADx) that helped to organize work on therapies, establish protocols, and push diagnostic technologies through the development pipeline.

But the NIH was never meant to be a risk-taking enterprise that would confront major diseases directly. Its primary role is support of biomedical research, not cutting-edge product development. A classic example is the monumental Human Genome Project, the first draft of which occupied Dr. Collins and other researchers for more than a decade. Clinical applications were left to others.

This new health agency can help ensure Americas continued pre-eminence in bioscience. The economic historian Angus Maddison estimated that half of all economic growth over the past 200 years is directly linked to advances in medical research and public health. Future progress will produce more than medical breakthroughs. It will also help solve the seemingly intractable global issues of unclean water, unstable food production, bioterrorism, renewable energy supply and environmental sustainability.

When my colleagues and I formalized our support of research on life-threatening diseases in 1982, we began deliberately. The Milken Family Foundations early grants to prominent medical scientists were effective in advancing important work such as the drug Herceptin, a breakthrough breast-cancer treatment. But by 1993, I concluded that progress was still too slow. We needed to break the mold as Darpa had. That called for a new type of organization.

What began as a group called CaP CURE evolved over the decades into organizations including FasterCures, the Prostate Cancer Foundation, the Melanoma Research Alliance and several centers of the Milken Institute. Our funding demanded research collaboration, a willingness to accept early failures, and an unprecedented sense of urgency. Instead of slowing progress by negotiating for intellectual-property rights, we left them with academic research centers and took no equity. The grant process encouraged early-career researchers, eliminated bureaucracy, gave patients a greater role in clinical trial design, and built closer ties among industry, government agencies and academics.

Our initiatives were some of the driving forces behind the doubling of the NIH budget between 1998 and 2003, the creation of the National Center for Advancing Translational Sciences in 2011, and the 21st Century Cures Act in 2016. This expansion has played a significant role in developing dozens of lifesaving drugs and has contributed to rapid progress on Covid vaccines and therapies.

The Advanced Research Projects Agency for Health is the next step toward faster cures. It would be a beacon as bright as the one that excited millions of young future scientists after Sputnik. As Covid has shown, time equals lives. Prompt establishment of this agency will save lives by saving time.

Mr. Milken is chairman of the Milken Institute.